Amidst the friendly banter and encouraging words, Chef Pascal Bonnafous, lecturer from the University of Toulouse, and Chef Frederic Cerchi, Director of Taylor’s Culinary Institute (TCI), may look like any other ordinary colleagues when you put the both of them in the same kitchen or in a lecture room.

But what if I told you that 20 years ago, you’d never have guessed the relationship between these two chefs!

Here's how these generations of chefs push, grow, and rise to become the best in their industry.

FOR THE LOVE OF COOKING AND TEACHING

Chef Pascal fondly remembers his days cooking with his grandmother and it was precisely this that pushed him to pursue his passion for cooking.

After completing his studies and being seasoned with 7 years of experience, he opened his very own restaurant where he brought in many trainee students from different French catering schools.

Not long after, he found a method to spread his philosophy of cooking. “I loved to teach even while I was a chef in my restaurant so I decided to continue studying to become a lecturer.” By going back to university, he successfully married his two loves - cooking and teaching.

During his first year as a lecturer, he met a funny, driven, and exuberant young man who, like him, had a burning passion for cooking.

Like Chef Pascal, Chef Frederic decided to pursue a career in cooking because of the passion nurtured by his family. “Even my grades went up because I found what I love to do!”

One fine day, during his university years in the University of Toulouse, the young chef-to-be was surprised to have a replacement lecturer. His first thought as Chef Pascal walked in was, “Wow, someone new!”

During that lesson, he was taught 20 ways of using a duck to its fullest potential.

“If the lecturer is nice and you're enjoying the lecture, you’ll definitely learn more.” And indeed he did! Chef Frederic left that class humoured, educated, and thoroughly entertained by Chef Pascal.

While he didn’t think much after, that wouldn’t be the last time he’d encounter Chef Pascal. In a blink of an eye, it was 2004 and Chef Frederic had finished his final year in Taylor's.

Fast forward to 2006, Chef Frederic was now a degree holder and had returned to Taylor’s to do his Masters. He was then offered a job as a lecturer and, with his love for teaching, he never looked back.

A FAMILIAR BUT UNEXPECTED PARTNER TO BUILD GREAT CHEFS

When Chef Pascal first came to Taylor’s in 2004, he noticed a very familiar face.

To his surprise, he saw a casual-looking Chef Frederic pinned up on a poster, promoting his school. “I was like, ‘Ayy! I know this guy!’ It was such a proud moment for me because he was one of the first French students to come to Taylor’s.” Unfortunately, that was the extent that Chef Pascal managed to 'reunite' with Chef Frederic at that time.

2 years later, Chef Pascal returned and was officially reunited, in the flesh, with Chef Frederic who was at the beginning of a blossoming career.

“Witnessing his evolution from student to lecturer, and now a director of TCI, has been very interesting. Though, I’d never imagine working with him all those years back!”

As an alumni of the University of Toulouse, Chef Frederic is honoured to be able to work hand-in-hand with his former lecturer in educating the next generation.

“I feel proud to transfer the knowledge of what I gained to my students here, together with the University of Toulouse through the partnership.”

Believing that hands-on experience is the way to improve one’s skills, Chef Frederic has sent all his students for internships abroad. Plus, under the guidance of Chef Pascal and many other Michelin-star chefs, he is confident that his students will be getting a first-class experience.

Chen Khai Loong, one of Chef Frederic’s many students, is living proof of what he believes in. While interning at 3 Michelin-star restaurant, Restaurante Martin Berasategui, Khai Loong even had the opportunity to meet Chef Pascal who was also amused by it. “Now, I meet the new student of my old student!”

Immediately after his internship, Khai Loong was chosen to represent Taylor’s and Malaysia for the Young Chef Olympiad (YCO) 2020 in India. Looking back at his first competition, he's certain that his performance during the competition was how the internship abroad prepared him for the tough road ahead.

But more than that, he credits the constant encouragement given from his seniors and peers for bringing him mentally to the finish line.

Knowing that it was his first event, Lai Jia Yi, a YCO2018 winner and Taylor’s alumnus, would constantly text him and would give him advice even while he heads to work! Meanwhile, his good friend, Muhammad Farhan, was also a constant support throughout his journey.

Though Khai Loong and Farhan are the best of friends, they confessed to being competitive with each other. According to Farhan, “both of us have this same spirit and are obsessed with cooking so through the positive competitive spirit, we’re able to learn a lot from each other.”

The two friends even completed their internship in Spain together. Their favourite memory working together was when they created a Malaysian dish for the head chef and restaurant owner, Chef Martin Berasategui.

Gaining his first Michelin star at the age of 25, Chef Martin Berasategui remains undefeated in Spain with his total number of 12 Michelin stars, so it was truly an honour for the two boys when he wiped the plate presented clean!

Khai Loong believes that this competitive spirit is beneficial. “We push ourselves but also share knowledge between each other because we want to go further together.”

Just like the camaraderie practised among Chef Frederic and Chef Pascal, the students, despite the differences in age and intake, have a strong bond with each other. Khai Loong is encouraged by the relationship possessed between the two chefs. “It’s like building a foundation, a family. It’s something so special that you can’t buy or take away.”

Though he’s certain, at least for now, that he doesn’t intend on being a lecturer, he hopes that he can still embody this culture of togetherness. “If they don’t pass down the culture, this culture would die. When Chef Pascal passed it down to Chef Fred, and then me, I can now pass it down to the other generations and friends so this spirit of being the best and rising together, will not die.” 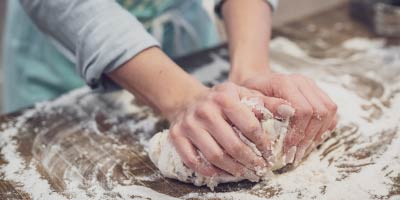 Taylorian Zernaish Tabba, shares the ups and downs of her education journey that led to her pursuing a Master’s degree in Philosophy (Food Studies) 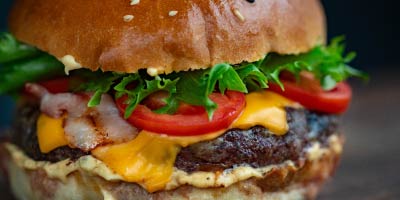 A RM460-Worthy Burger That Doesn’t Break the Bank

Want to taste what a RM460 sumptuous burger is like without breaking the bank? Try Taylor’s Culinary Institute’s lavish burger recipe.