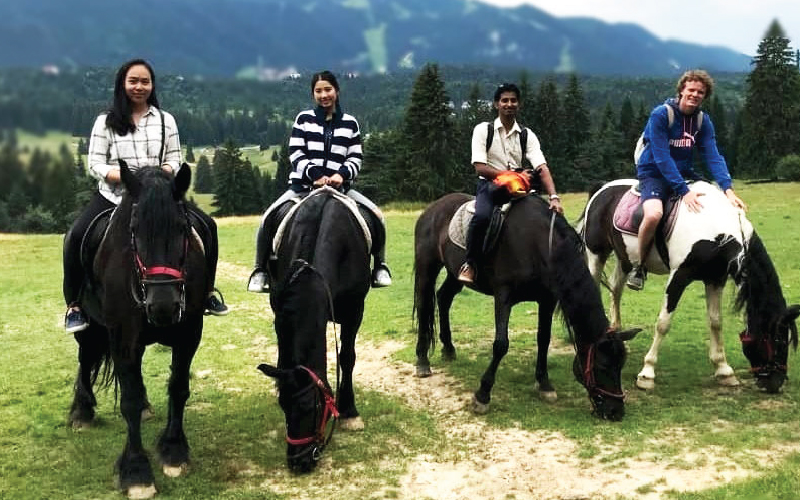 I woke up bitterly cold in the sleepy town of Brasov. The 13-hour train ride from Budapest was tiring but rewarding. From my window seat, soaring mountains hidden by clouds and vast woodlands stretched before me evoked a sense of nostalgia. Watching the scenery closer from a distant edge made me ponder on the future, and as it slowly disappeared from sight, I reminisced my past. My thoughts were quickly brought to the present day at the sound of air whistle, a reminder that my new journey in this foreign land would begin.

Stepping off the train, I was immediately greeted by representatives from AIESEC. After a short tour of the city, we headed to the dorms located 30 minutes away. At first glance, the dormitory was not much: clogged toilets that reeked of cigarettes and urea, cold showers, and a spine-hostile mattress as beds. It was much less than what I was used to back home. Knowing that this would be my home for the next 6 weeks, it was time to make peace with shortcomings and make do with what was at hand. I bought a shower caddy to put all my toiletries so I won’t forget anything mid showering. To make a DIY clothing rack for my laundry, I bought string and some hangers. Just as I was adjusting to the living conditions, we were transferred out of dorms and into the university campus a week later where functional washing machines were abundant and hot showers ran from 7.30am to 11.30pm daily.

Volunteering duties were postponed the following week to await the arrival of other latecomers. With extra time on my side, I took this opportunity to explore Brasov with other volunteers. There was something about Brasov that just screamed ‘magical’ and ‘fairy tale’. The historical monuments and colourful buildings built on cobblestone streets teleported me to a different time and place. Brasov did not pretend to be a medieval city. It actually is. Republicii Street is the main pedestrian shopping thoroughfare. It held numerous shops, cafes and restaurants occupying ground floors of historical buildings. Walking a little further into this street, I found the Piata Sfatului, the town’s Council Square and the 13th-century clock tower. As a central square, The Piata Sfatului was the perfect place to have coffee and people watch, immerse myself in the present and observe Romanian city life.

Another scenery quite impossible to overlook was Tampa Mountain. The Brasov sign which mimics the iconic Hollywood version oversees the town of Brasov. The climb up the peak was approximately 45 minutes for regular hikers. For people like myself with non-existent stamina, I took a cable car up and down. Other notable attractions covered were the Black Church, Cetatuia Fortress, Rope Street (the narrowest street in Europe), and Citadel Hill. In the same week, I managed to do a day trip to Bran Castle and Peles Castle. Bran Castle is a mandatory tourist attraction for fans of Dracula a.k.a Vlad Tepes. Imposing in shape, the castle supports a largely gothic architectural design. In both castles, I found beautiful courtyards, spacious halls and heavily decorated rooms for different uses. Medieval lovers would immediately fall for Brasov’s infectious charm and flare.

Faithfully immersing myself in the favourite Romanian past time, the entire volunteer group hiked the 7 Stairs Canyon located in the Piatra Craiului Mountains. By far the most challenging hike in my 22 years of existence, the 7 Stairs Canyon presented steep slopes, rough trails and a series of narrow stairs and ladders to reach the canyon. Those not used to climbing mountains should be prepared for its vigorous climb but fret not as all hard work is rewarded by raw nature, beautiful waterfalls and clean fresh air along the way. Even for those not big with nature, by the end of this, would find a newfound appreciation for the wilderness.