HILTI IT Competition (ITC) is an annual competition held by HILTI, a multinational company offering products and services for professionals within the construction industry. The competition encourages students from various disciplines to innovate solutions based on the challenge topic for that year. This year, the challenge focuses on gamifying cybersecurity awareness within the construction industry given the rise in cybersecurity breaches in recent years. Topics included social engineering, phishing, device and password security, and ransomware and malware.

Evelyn Chen Siaw Yin,  Ng Zhen Lu, and Vighnesh A/l Sivanesan from Bachelor of Computer Science, alongside Mike Goh Chia Chung from Bachelor of Information Technology,  trumped over 200+ teams worldwide to secure the GRAND CHAMPION spot at the HILTI ITC 2022.​ They've developed a multi-player game aimed to effectively and cost-efficiently educate its users about cybersecurity principles revolving around phishing threats using technologies such as Unity & Firebase, along with programming a deep-learning engine using GPT-3 Engine (Open-AI) to deploy within the proposed game.​ 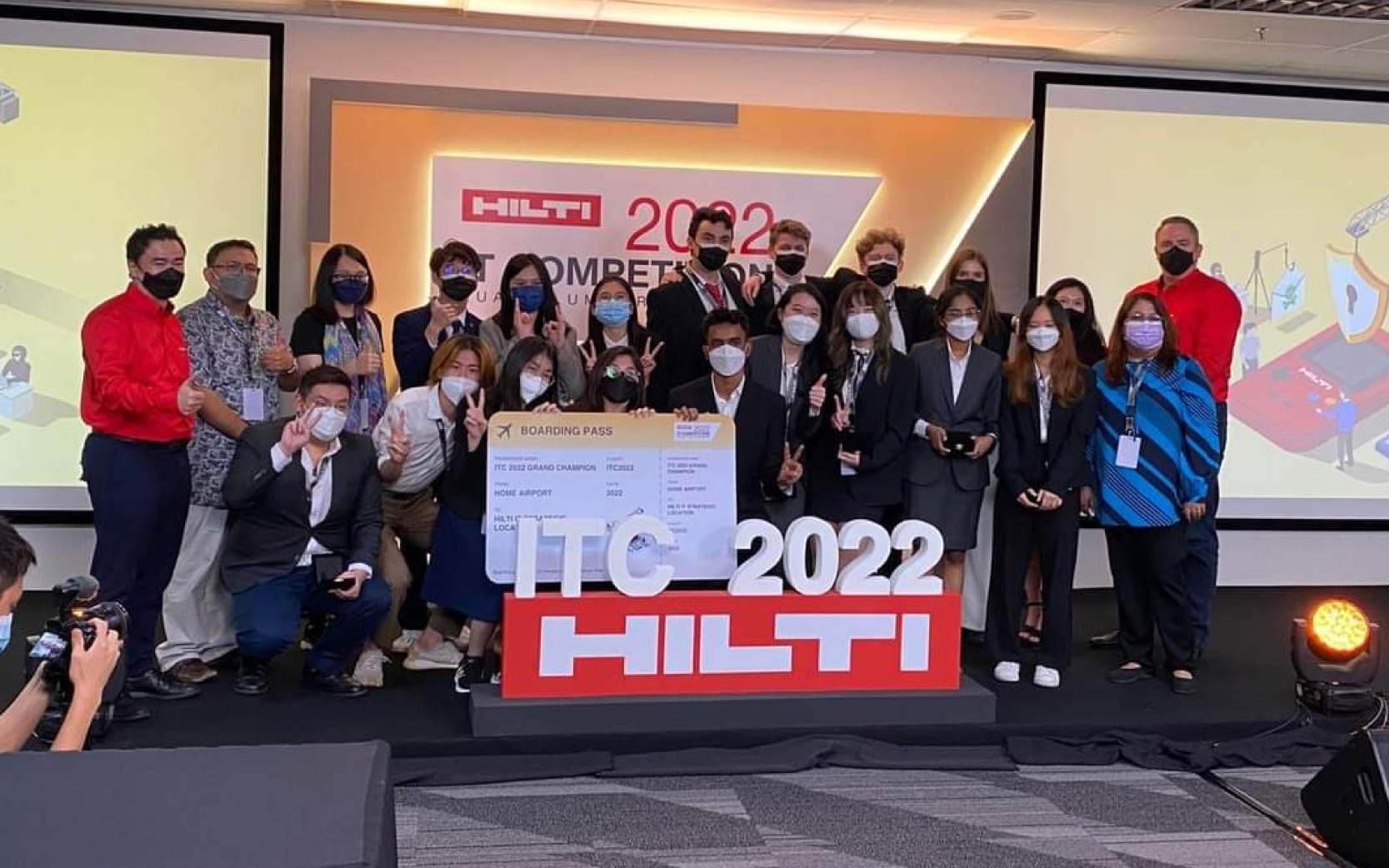 The solution created, Imitieren, is a simulation-based game specifically innovated to spread phishing awareness among the mass public. Through the game’s dual perspective, precisely that of an attacker and a potential victim, the game encourages its players to identify phishing red flags and understand the thought process of an attacker. By understanding the social engineering techniques used to perform phishing attacks, players are provided with a more holistic understanding of phishing through our game. As players are placed into the game simulation, they would experience first-hand how phishing attacks can be easily encountered in real-life and understand the consequences of falling for one.

The team kept three main priorities in mind while designing the solution: holism, simplicity, and interactivity. In the event of a phishing attack, there are two primary identities involved: the attacker and the victim. With this in mind, the team incorporated both perspectives into the game to create awareness of the red flags to look out for and understand the purpose of why phishing attacks are carried out in the first place. By understanding the information of interest to the attacker through the roles in the game, players would be more likely to prevent themselves from falling prey and using the information learnt in a real-life scenario.

To convey the purpose of the game, the team focused on simplicity in making technical aspects of phishing fun and easy to learn for the users by implementing simple gameplay such as clicks, drags, and drops. Thus, allowing people with minimal technical knowledge to play the game and provide greater relevance to the target audience — HILTI's entire network. Interactive elements, such as allowing the attacker to send phishing emails to the potential victims and a discussion session at the end of the game, are vital elements to keep users engaged and hooked in discovering who the attacker is. The team believes the solution has considered critical deliverables of the problem statement, leading to a favourable impression to the panel of judges.

Having grown with the solution from its ideation to designing stage, and finally presentation phase, the team undoubtedly wishes to see the game launched and used by users in upskilling their susceptibility towards phishing attacks. The team recognises that the solution requires much more refinement and technicality changes to ensure the team’s vision of providing a seamless and engaging experience for phishing attack awareness to the target audience. 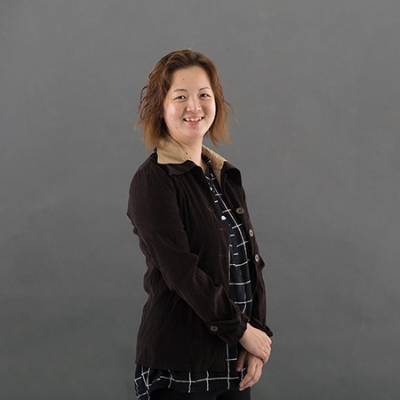 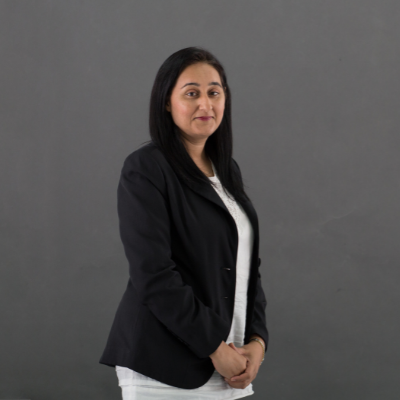 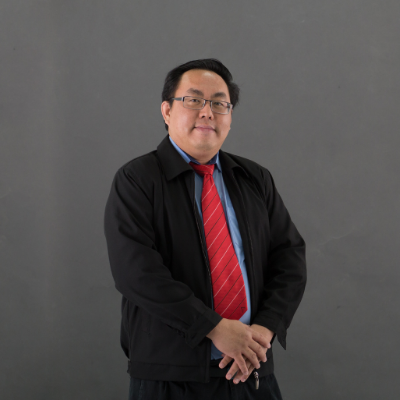 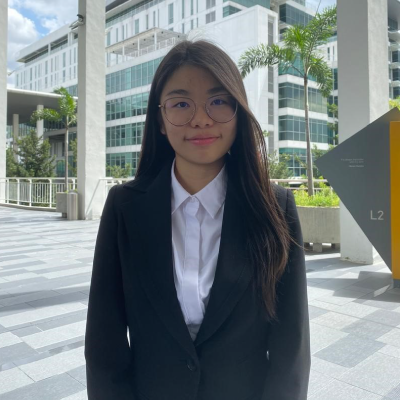 “What started off as friends coming together to work on a project turned into team comrades aiming to clinch the grand prize. And truly, through the multiple disagreements, sleepless nights, and tears, it's incredibly mind-blowing that we were able to achieve our dream, and for that, I'd like to thank every member for upholding our team, each in their own way.

Throughout the entire experience, I was not only able to collaboratively work with my team to refine our ideas into a proper business pitch but was able to challenge myself towards enhancing my soft skills. Aside from the competition preparations, ITC 2022 allowed me the opportunity to meet like-minded individuals, all brimming with innovative minds and outstanding personalities, that broadened my personal network connections.

It's not an understatement to say that the four-day experience is one I can never forget, and looking back, I feel myself to have grown intellectually and emotionally from the immense support I've received from my teammates, friends, mentors, and judges. Once again, I'd like to thank our lecturers and programme directors at Taylor’s University for supporting me and my team throughout our competition. Truly grateful and humbled by the faith our university has placed on our team that enabled us to wholeheartedly immerse ourselves within the competition.” 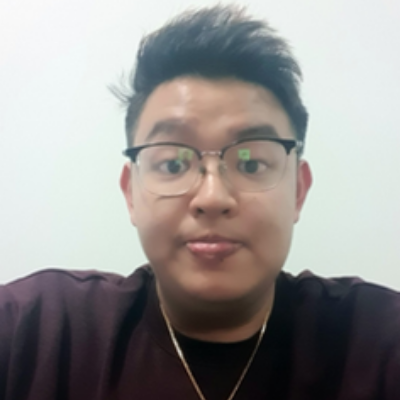 “Participating in such a huge event is an eye opener for me.  Throughout the whole journey from submission to being one of the finalist, it wasn't easy. Our team had to go through all sorts of difficulties, but I'm blessed that our team is pretty diversified and able to handle and overcome all of these challenges.

If I were to ask the question — Would you do it again? My answer, with no doubts, will be yes.

Although the journey was difficult, but I was able to learn a lot from it, weather it was through a personal or team view. I also want to thank the people that have helped me and my team throughout this journey including our mentors, judges, friends, mentors from Taylor's, and also Taylor's University for giving us a chance to participate.” 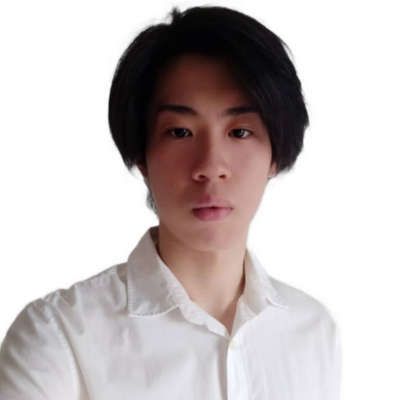 “HILTI IT Competition was a daunting but highly rewarding experience from start to finish. The events were well-organised and seamless with passionate mentors and professional judges who provided us with immense support throughout this journey. No doubt it improved our personal and professional growth with additional areas of improvements to teamwork, management, and critical thinking skills. The competition radically changed my future outlook for the better.

I'd like to thank Taylor's and my dedicated academic mentors, the programme directors of SOCIT for their guidance. Providing us with countless opportunities such as HILTI ITC, publishing papers, and many others. They've been a positive impact on our lives.” 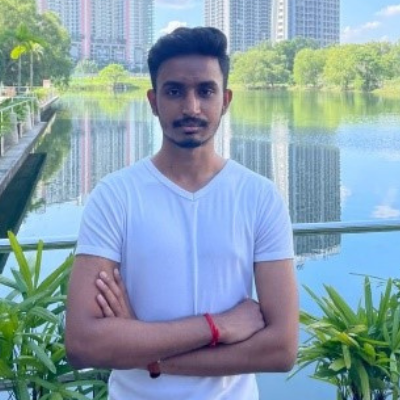 “It's a competition where innovative gladiators come together to pitch their state-of-the-art solutions. Partaking in this prestigious competition, the HILTI ITC 2022, is an experience never sensed before. The journey from the day of registration to the nerve-racking finals day is a memorable venture. This competition not only propels your innovation dexterities but also introduces you to pitch your brand skillfully.

Noteworthy feedback is continuously provided by the mentors with the goal of shaping you to be a finer presenter, leader, developer, and innovator. Besides, it serves as a healthy networking channel for students to elevate themselves to companies for hiring. With that being said, I thank HILTI and Taylor's lecturers for providing us this opportunity. Concluding, I strongly urge aspiring student innovators to join the HILTI ITC in the coming years! Cheers!” 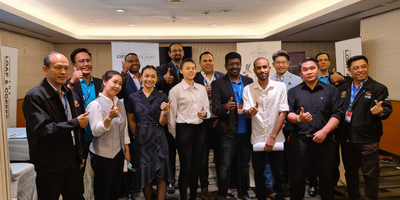 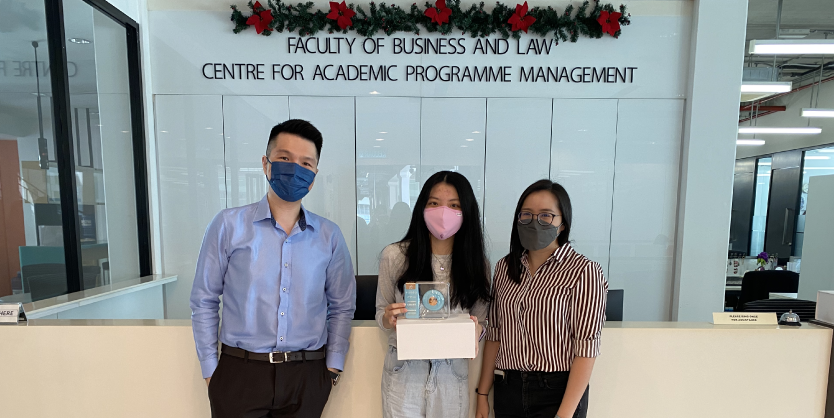 Over the August 2021 semester, Taylor's University collaborated with FOREO, a Swedish beauty-tech company, to deliver sharing sessions for two subjects. 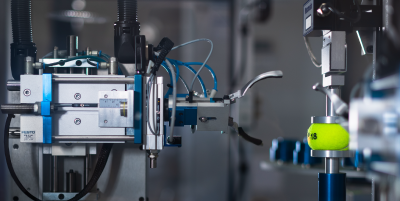