Shahmeena Labeeb (third from left) is one of two Gold Award winners for Malaysia at the Asia Young Designer Award (AYDA) 2017 recently.

A design project to repurpose an abandoned site and conserve honeybees in Malaysia by Shahmeena Labeeb, a final year student at Taylor’s University, bagged a Gold Award for the Interior Design Category in the Asia Young Designer Award (AYDA) 2017 recently. Currently pursuing her undergraduate degree in the Bachelor of Arts (Honours) Interior Architecture at The Design School, Shahmeena’s entry called, ‘Plan Bee – A City Beekeeping Project’ focused on a futuristic design in regenerating old spaces within Kuala Lumpur, also creating an ecosystem to assist in bee conservation – to ensure the food chain is undisrupted for future generations.

“We were pleased to learn Shahmeena’s win at AYDA 2017 and proud of her efforts to produce a viable and real-world solution, which benefits the future of the planet,” said Ernesto Pujazon, Head of School for The Design School, Taylor’s University. “The award is one of Asia’s premiere design awards, with many worthy submissions and to be recognised is a feat of its own. The acknowledgement is a further testament to the quality of Taylor’s graduates,” he said.

Taylor’s University was also awarded the best University and Mr. Mohd. Redzwan Hisham, senior lecturer at The Design School, as best Mentor. In its 10th year running, the theme for the competition was ‘You for Tomorrow: Future Living as Envisioned Today’, challenging the technical and foresight abilities of young designers on the future needs of the nation. Shahmeena’s project was one of 5, 000 submissions received from more than 600 design schools within Asia.

“I feel blessed and humbled to be rewarded for the hard work I have done,” she beamed. “As environmental concerns become more of a priority in architecture and design, I chose Plan Bee-City Beekeeping as my final year project, aiming to accentuate an immediate issue to the world.  Moreover, to broaden my spectrum as a designer to foster a design that would benefit our environment and the people to result in a better tomorrow.”

“When I first started my research on the issue for Plan Bee-City Beekeeping project, I knew very little about honeybees and how vital they are to our food chain. The project opened my eyes in ways I never imagined, regarding the natural world which surrounds us and constantly ignored in our everyday life. As a designer, it is interesting how the research phase broadens our knowledge out of our profession; and so far this is the most knowledgeable research I have done throughout my studies,” said Shahmeena.

Initially enrolled in the Taylor’s University Diploma in Interior Design, Shahmeena progressed to pursue her degree in the Bachelor of Arts (Honours) Interior Architecture, making her recent award a sweet moment of victory, “Completing my undergraduate with an honourable award has encouraged me to work even harder to achieve my goals in the future, as this is just the beginning of my career. So far, it has been the best experience of my life as a designer.”

As a gold award winner, Shahmeena has secured herself a six-month paid internship with IJM Land Berhad (IJM Land), RM5, 000 in cash and will be one of two representatives for Malaysia to compete with 14 other countries across Asia – in the running for the Asia Young Designer of the Year Award 2017. The regional competition will be held in Kuala Lumpur, Malaysia. 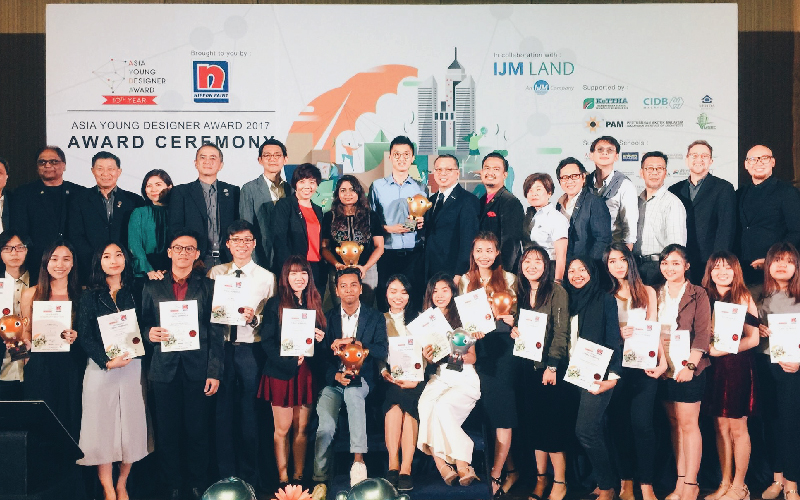