In 13 weeks, they had to create a robot that runs on a track and pick up a load that is 20cm in height.

Fresh in the world of engineering and only in Semester 1, their team leader, Madivaanan Ganesh, 23, was armed only with basic knowledge in Java and html. Yet, together with his team mates—H. Muhammad Umar Ali, 22; Mohamed Nazran Nazeer, 21; Mohammed Izzat Bin Zamros, 22; and Chong Chee Hao (Zach), 21—they got into a huge learning curve, spent 2 weeks deliberating on the design of their prototype, 3 weeks on its concept and the rest on execution. Through it all, they picked up new skills like the basics of Arduino programming.

“In the beginning, we had no proper guidance at all. Then, our seniors ran two workshops and we sought their help to learn what we need to know,” Madivaanan said.

It’s from these workshops that they learnt more about design and after deliberating with one another, they came up with a prototype design that looked like a miniature crane with small track wheels, measuring about 3 – 4cm while normal wheels are about 10cm.

Apart from that, the team tucked the wiring in a box to avoid the cables from crawling everywhere in an unsightly manner, making their design aesthetically pleasing.

“So many things went wrong when we first started out. Our Roboco won’t run on the tracks all the way. The worst for us was the coding part because none of us except Zach knew how to code so we relied on him during that phase. We made so many mistakes and went through lots of trials and errors. Even until our last trial run, the prototype wouldn’t work,” Madivaanan added.

Despite that, the Bachelor of Mechanical Engineering students stayed positive throughout, kept trying and didn’t give up. When the day came for them to showcase their project, the team presented their project and its process to a panel of judges who visited each booth.

“Then, it was time to run our prototype and we were quite surprised that it ran on the track smoothly and picked up the load with ease. It was perfect!”

The panel of judges, who consisted of industry practitioners from Daikin and Continental as well as lecturers, were impressed with the design which stood out from the others.

Madivaanan and his team won RM350 for First Prize under the Smart Height Adjustment Robot Challenge category. This was their first engineering challenge but it won’t be their last. 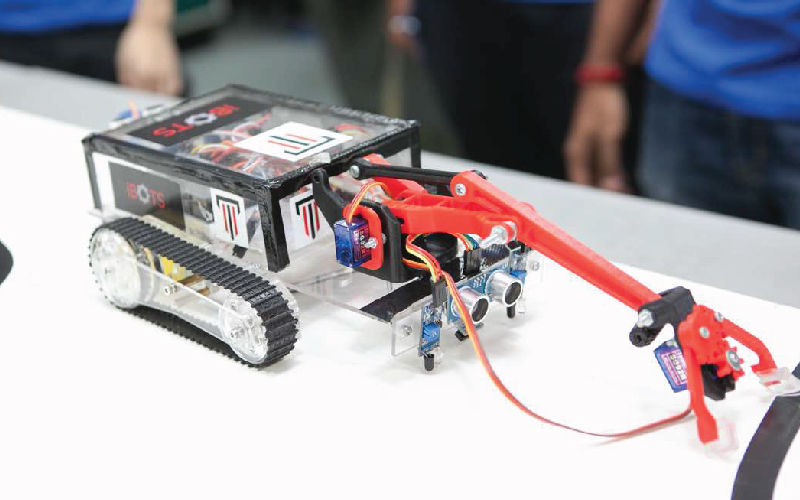