Living away from home, working part-time and getting over being shy were all experiences that Lee Soon Onn benefited from during his exchange to Australia. 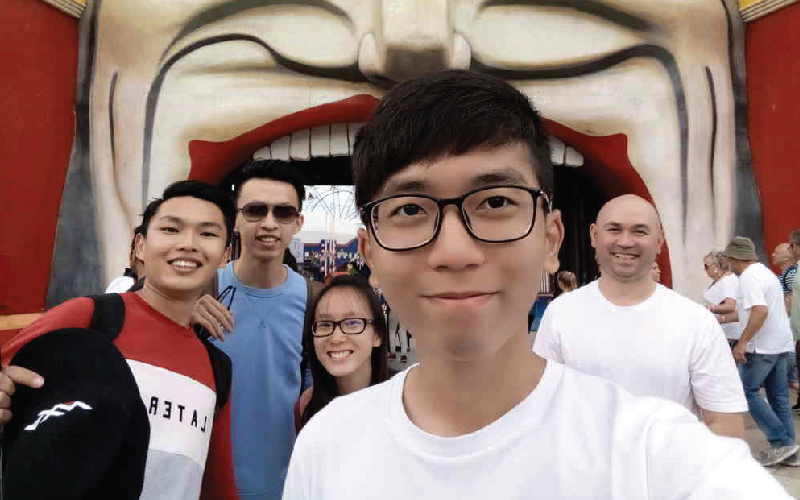 Lee Soon Onn with his classmates at Luna Park in Melbourne, Australia

Lee Soon Onn opted to spend a semester on exchange at the Royal Melbourne Institute of Technology (RMIT) in Australia. Unlike Taylor’s University, RMIT is not situated on a single campus and its buildings are located all over the city. As he said, “it initially took quite a while to memorize the exact locations where the classes were being held!” Reflecting on his studies in Biosciences he said that “In every class, we were expected interact pro-actively with other students as well with the lecturers, which is quite different from what we have in Malaysia. There were tons of activities that require us to communicate constructively with the lecturers in discussion and also engaging with the community and society to put our knowledge earned from classes into actions”. He went on to say that, “I always thought that the subjects in a foreign country would be more difficult than what we have here in Malaysia - but they are actually pretty much similar, just that the ways we learn are different due to the culture”.

He found that RMIT provided a wide-range of extra-curriculam activities and a sport centre where he was able to enjoy various kinds of sports, such as netball, basketball and Aussie Rules Football. He stayed in Unilodge Bundoora, which is a private halls of residence by the campus. “I really enjoy the living environment. The furniture was brand new, it was high-tech and kept clean almost all the time. There were facilities such as a laundry, an iron, photocopy machine, pool tables, meeting rooms, common kitchens and a silent study area. All of my basic needs were taken care of” he said. In terms of the social environment, he found that there were some major differences. As he commented, “To be frank, I now really miss the gentle and kind environment in Australia - because whether you are a stranger or not, you will treated and greeted politely” Adding that, “I made one discovery for myself - that such positive energy from the people around me made everyday a better day, and I have learnt from it and I will apply it in Malaysia”. He also found Melbourne to be a very multi-cultural city, which was full of people from around the world. “Frankly speaking, it was a challenge for me to approach caucasians at first………due to the cultural differences, the language barrier and most importantly my inner shyness. Nevertheless, things started to change as time passed, and before I noticed I was surrounded by people from all sort of different background and made tons of friends”.

Besides focusing on his studies, he also took the opportunity to work part-time in a restaurant. As he noted, “This really helped me to interact with other people, improve my English and to cope with my living expenses in Australia - as things are not cheap”, but added that his one future tip for exchange students would be this, “if you can cook for yourself – do it – as you will save a fortune!”. Reflecting on his semester on exchange, he said that, “While this was just one semester, it was long enough to make a great impact in my life. For a start, my English definitely improved during the semester. Time management is another skill that I have honed. I didn’t really have as much time to do all the things I wanted to in Australia. I needed to study, finish the assignments, hang out and participate in social events and do a part-time job……..and all in just 5-months. This is where I learnt that I had to prioritise. At times, I just wanted to slack-off and be idle, but I had to discipline myself to make the most out of the programme and my time”. Clearly all that discipline paid off, as Lee Soon Onn did well by achieving four Distinction grades - which is well above the average in Australia. Of course, you can’t talk about Melbourne without mentioning the weather. As he said, “the weather is really random in Melbourne – moving from being extremely hot to extremely cold. At first, you just have to endure it. But believe it or not, I am now missing the weather down there already!”